I’ve been thinking about what precipitated my brothers and me to start making improvements in safety for our parents who had lived independently in their small 2 level house for close to 20 years.  One of the many concerns had to do with bathroom safety. Being in their mid to late 70’s at the time, Mom indicated that Dad, who enjoyed tub baths, could get into the tub all right, but had an extremely difficult time in getting out of the tub.   Our Mother, on the other hand, who took showers, and had recently been diagnosed with Parkinson’s, was completely in favor of having some grab bars installed due to her unsteadiness.

In addition, we had noticed other subtle changes in how our parents got around in the home; but the bathroom issues were of greater importance due to the possibility of falling.  It is a well known fact that a high percentage of people over the age of 60 are at higher risk for falling, especially in the bathroom.  Not only is it important to install grab bars and/or have other safety equipment in place, but instructions should also be given as to the correct and safe way to use them.

Here is a list of the safety improvements we made:

1. Vertical grab bar on the wall to be used when entering the tub; and a second one located on the tub/shower wall (about the middle), for use if needed, while standing or sitting during the shower.

2. An “over the tub” clamp-on curved grab bar was installed, which was used for entering and exiting, but especially useful for Dad to grab on to when getting up out of the tub.

3. Blue “painter’s tape” was used to wrap around the white grab bars (making it look like a blue/white candy cane) This was done because the tile was white and the bar was white, which made it more difficult to distinguish the bar from the tile.  We could have gotten stainless steel grab bars, but Mom preferred the white grab bars.

4. Separate shower stool available so that Mom could sit while taking her shower.  She could safely sit and get up from the stool, using the grab bar installed on the mid wall of the tub/shower enclosure.

You can obtain these bars and other safety devices in places such as:  1) on-line by searching for bathroom safety equipment, 2) local medical supply companies, 3) drug stores such as Walgreens, or Rite-Aid, 4) hardware stores or warehouses.   Also, some of the equipment may be considered what is described as “durable medical equipment,” which Medicare may pay for IF the patient’s doctor deems it necessary.   Next time you’re in your parents’ home, check out the bathroom; have a discussion with them; then implement any necessary safety changes.  Early is better than too late.  Until next time…..

“The best way to cheer yourself up, is to try to cheer somebody else up.”  Mark Twain 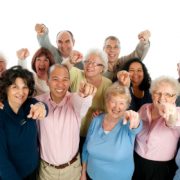 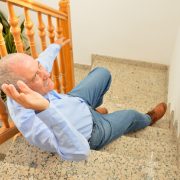 Stay Put (Age in Place)? or Head Out?